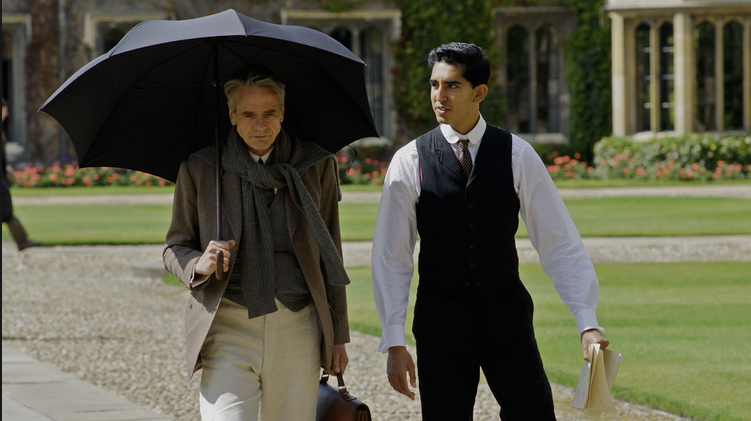 How do we re-visit history? Watching the continuation of the Rhodes Must Fall campaign at Oxford I went to see The Man Who Saw Infinity with a greater consciousness of how our institutions choose to tell their own versions of the past.

The film about the self-taught genius Indian mathematician Ramanujan stars Dev Patel as the devout Hindu who believes his complex formulae are revelations from God, and Jeremy Irons as his atheist Cambridge don friend and champion G H Hardy – struggling to make sense of this exotic talent who speaks the same language of pure maths but interprets it through intuition, not the rigour of making proofs.

For a film that is mostly ploddingly predictable and cosy in its construction and imagery, to its credit, it does not play down the racism – Ramanujan was denied a fellowship by Trinity College Cambridge dons who called him a wog as much as the louts who beat him up on the street. Like many other modern screen dramas it has a plot arc that sees the maverick outsider talent (female, black, gay, working class) admitted at last, despite the narrow mindedness of the time and the men in charge (see all those US military films like GI Jane, Men of Honor and in its own way Trading Places with Eddie Murphy). The optimistic momentum of all such films is that exception is always made for special talents and eventually the social climate changes too. To its credit that idea doesn’t wash here. An exception is made for an exceptional mathematician. There is no sense that Cambridge as an institution was willing to consider Indians as true intellectual equals. It’s worth remembering that the University denied women degrees till 1948. In a parallel plot Bertrand Russell is fired for his pacifism as the First World War erupts and reveals the confidence of the ruling classes. As Hardy sees him off, expressing regret for Russell’s treatment, he asks where he’ll go. “Oxford,” declares Russell, played with a rakish moustache and a twinkling eye by Jeremy Northam, “and wait for them to ask me back.”

It’s interesting to see that The Man Who Saw Infinity does play fast and loose with the truth to make his story more palatable in different ways to a modern audience. GH Hardy was in reality in his 30s, only a few years older than Ramanujan, not the 60 something we see on screen. Jeremy Irons, who plays him says he thinks there was something Charles Ryder-like about his fascination with the Indian genius, and points out that Hardy went on to have a homosexual relationship in later life.

Apart from making the pudgy Ramanujan into the handsome Dev Patel the film imposes a parallel plot about his relationship with his young wife Janaki. In the film she’s an adult and their love is sincere. Her mother-in-law hides his letters to her, to prevent her going to join him in England. In reality Janaki was married to a man 12 years her senior and was only 13 when she moved to live with Ramanujan. For 5 years they were apart while he lived in Cambridge. When he died a year after his return to India she was only 21 and remained unmarried (another traditional Hindu custom) till her death at the age of 94. Status, recognition and a decent government pension only came to Janaki in the 1960s as his posthumous fame grew.

Does it matter that the touching romantic plot line is a modern invention? Or does it legitimately help a modern Western audience relate to him?

So I come back to Rhodes Must Fall. How do we choose to view our history and where do we put our sympathies? Portrayed in much of the British press as a battle between a sensible calm institution and trigger warning-obsessed ungrateful immature agitators, what was shocking was how Oriel College, Oxford, having promised a consultation on whether to keep the statue, speedily shut it down when anonymous wealthy donors threatened to stop giving. Where was the process then? The real outrage is the selective application of “rules” and open process when it comes to privileged institutions refusing to face scrutiny. The Indian writer Amit Chaudhuri observed in The Guardian that Cecil Rhodes in his will talked of “the establishment, promotion and development of a Secret Society, the true aim and object whereof shall be for the extension of British rule throughout the world”. A key reason student objectors want to take down his statue is to say we should not celebrate the attitude his bequest was linked to. Like slavery – so integral to much modern institutional wealth – privileged institutions would rather not talk about that history anymore. In which case it’s not the students who are trying to selectively erase history.

Even posh tweed coated period dramas are starting to look little harder at our own past. Perhaps it’s time our institutions did the same.

This article first appeared in The Big Issue magazine. Journalism worth paying for. Available from street vendors or subscriptions here